My My, Mount Waverley MELB

Mount Waverley is the next closest suburb from where I am at and a suburb that has a limited number of good restaurants. Adventure beckons on a Friday night and with an Entertainment book voucher at hand, we headed to one of the busiest Vietnamese restaurants located in the Pinewood shopping area.

Service is efficient despite being packed full of customers although did notice a few confused moments among the staff members when delegating tasks - such is life at any work place. 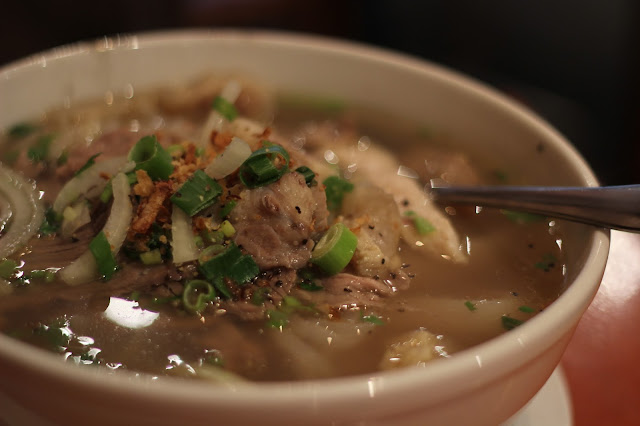 Pho beef special combination - soup was lacking much needed oomph that comes from prolonged hours of simmering beef bones in a herb and spice concoction. Decent serve of meat but may not suffice for the big eaters out there. 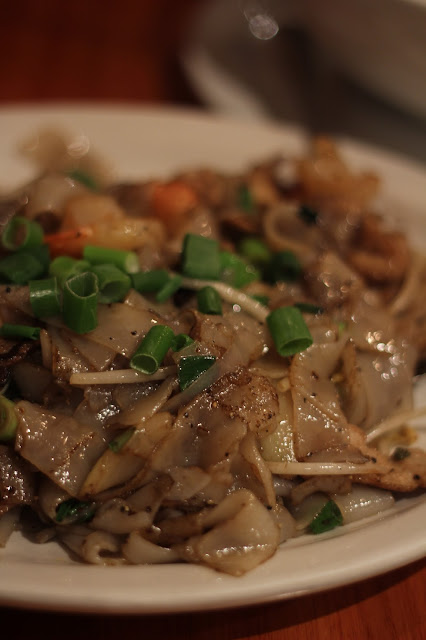 Fried rice noodles with pork and king prawns - again, lacking in the taste department and verging on the oily side of the scale. 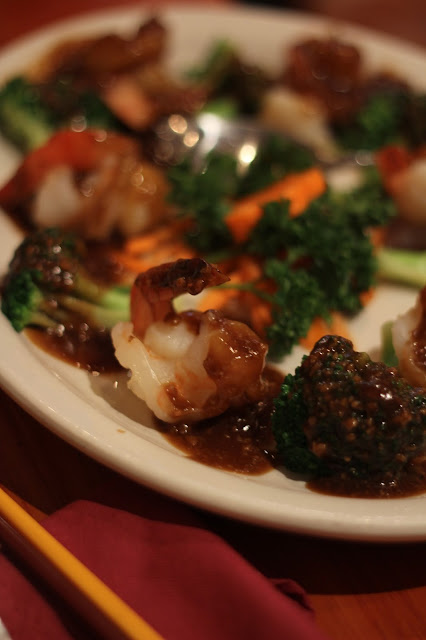 Vietnamese My My special - scallops wrapped in prawns and topped with a salty oyster sauce like mix. Not sure if I liked the oyster sauce mix. 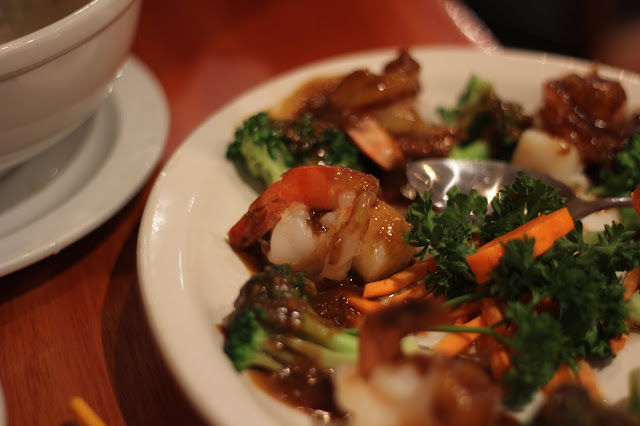 Posted by Michelle at 2:11 AM No comments:

Just when I thought I have explored most of the brunch spots in CBD, along came Calia, a restaurant led by a Michelin star chef. Expecting a hefty price tag attached, I was surprised to note that the prices were actually quite comparative to other brunch outlets and in terms of the interior, it was chic and modern. 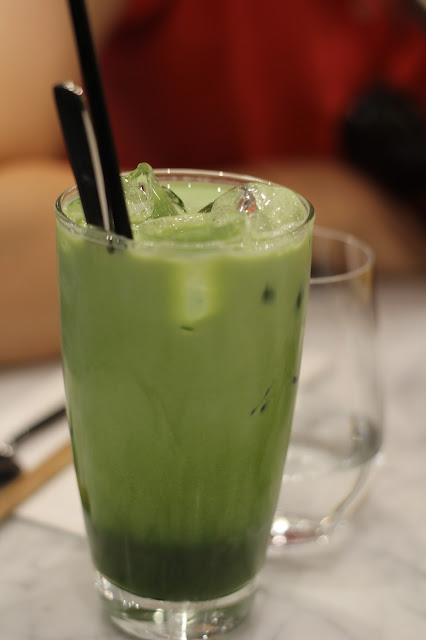 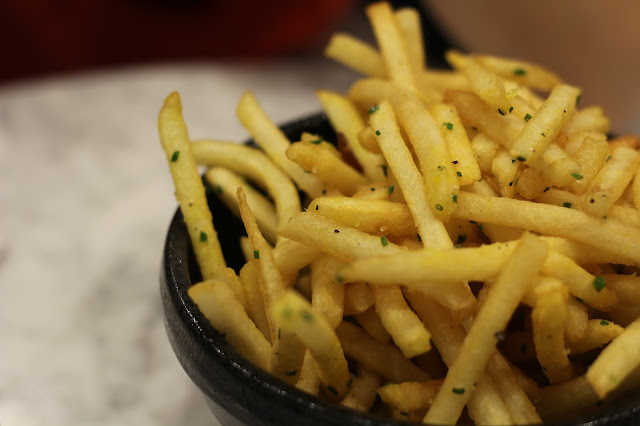 Truffled fries - I love fries and found this amazingly difficult to stop eating. Has a good amount of truffle essence in it and fries were crisp perfection. 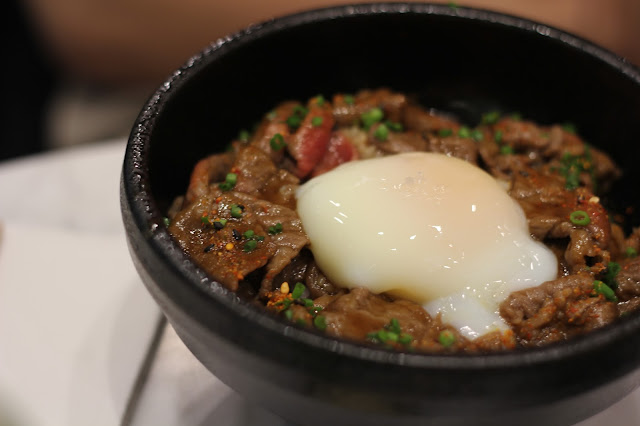 Marbled sukiyaki bowl - topped with a 63 degree egg that spreads easily over the tender, soft wagyu pieces, it was delicious. Not sure how did the chef prepare the meat but goodness me, it was sensational. Worth a try for the carnivorous out there. 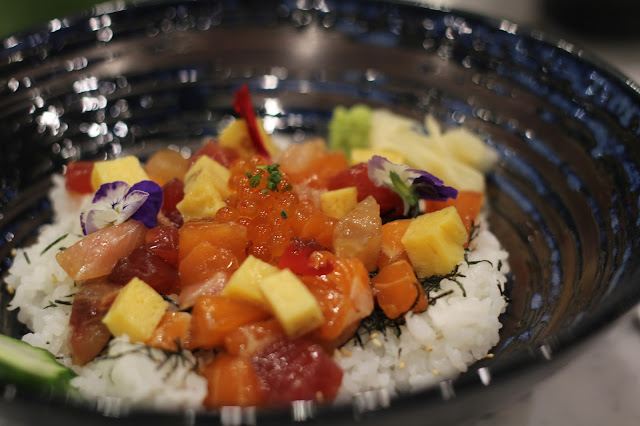 O'Bara bara - marinated chirashi of diced tuna, salmon, kingfish and tamago, topped with ikura and garnished with decorative flowers. Made picturesque by tactful placement of toppings, it's beauty had been easily overshadowed by how flavourful and fresh each individual ingredient was. Wasabi was freshly graduated and one only needs a quarter of a pea sized amount else it may compromise the seafood taste. 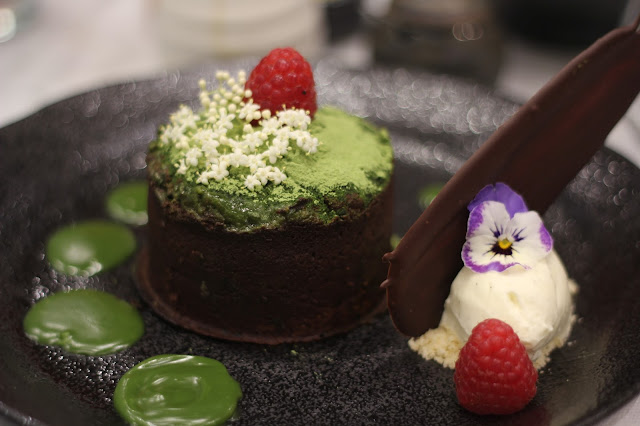 Matcha lava lava - I was feeling very piggish that day and gunned down this indulgent piece of dessert. Loved how strong the matcha flavour was here and how again, it has been artfully created. Talk about a smooth piece of cake that has no irregular shapes surrounding it. Call it the supermodel of desserts if you may. Raspberries were plump and juicy whilst the addition of cream softened up the intense flavours slightly. Overall, would be happy for round 2. 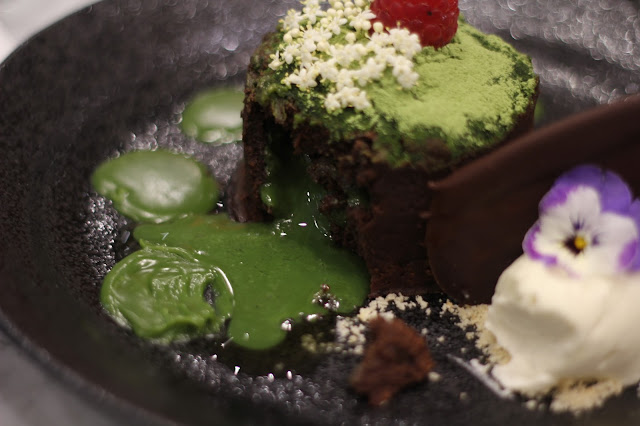 Posted by Michelle at 1:39 AM No comments:

I have been craving for protein a lot more since I have started working out 5 days a week. When I lack protein in my diet or if I have it too late after exercising, I tend to get muscle cramps or sometimes, binge unnecessarily.

Dumplings are an excellent source of protein, especially if you have them steamed as opposed to being fried. Ok, so I did have lunch rather late that day and so the craving begins.

A quick fix would always be rocking up to the food court and selecting a few items from the front counter of any shop. Dumpling plus caught my eye for the variety of food available and priced decently as well. 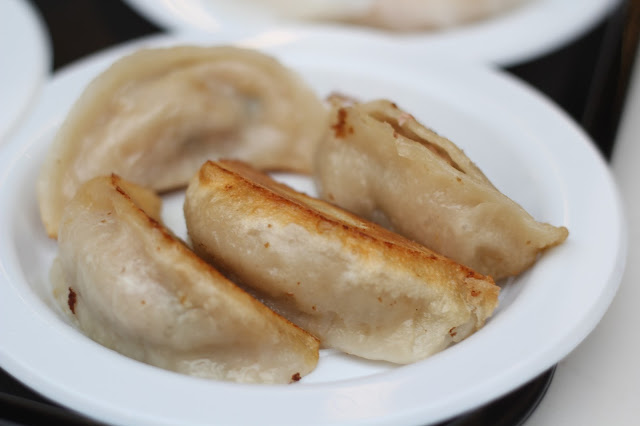 $1.50 for one and $10 for a plate of 10. I could have easily polished off a plate of 10 but decided to hold back and try the other types of dim sum available. Dumplings were decent tasting albeit having a thick pastry skin layer. 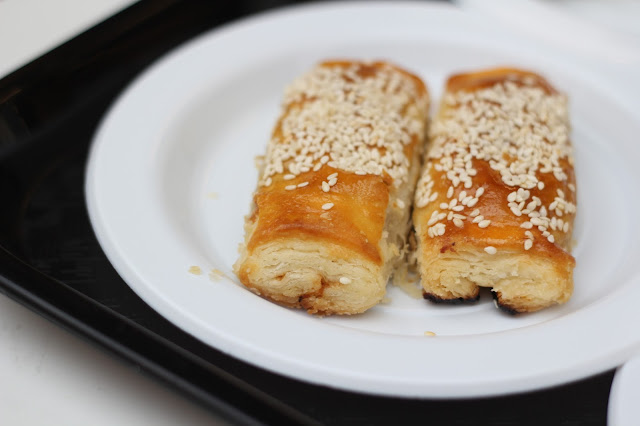 BBQ pork in baked pastry - not much protein in this one although kudos to the chef for a well made baked pastry layer. Loved how it was flaky and slightly sweet to taste. 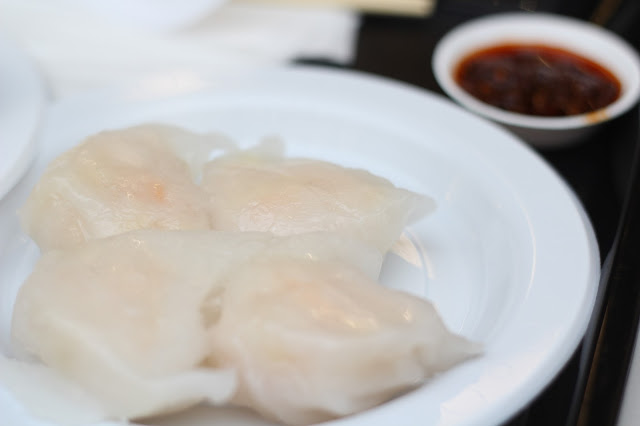 Prawn dumplings - at $6.80, this is not one plate to wolf down. Prawn bits were evident in here and tasted good too. 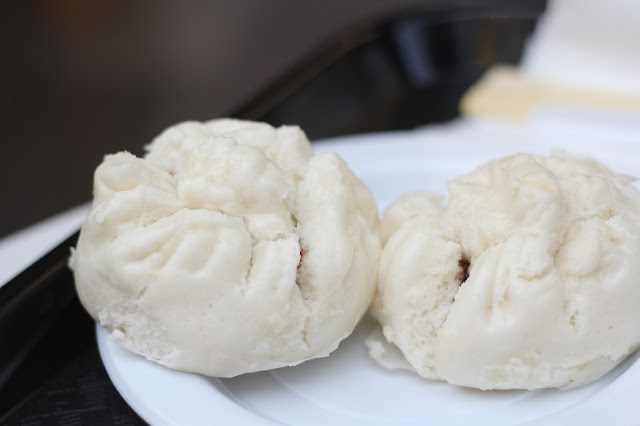 Steamed BBQ pork buns - the filling to bun ratio was spot on here. Filling was well soaked by all the lovely BBQ sauce from the pork filling. 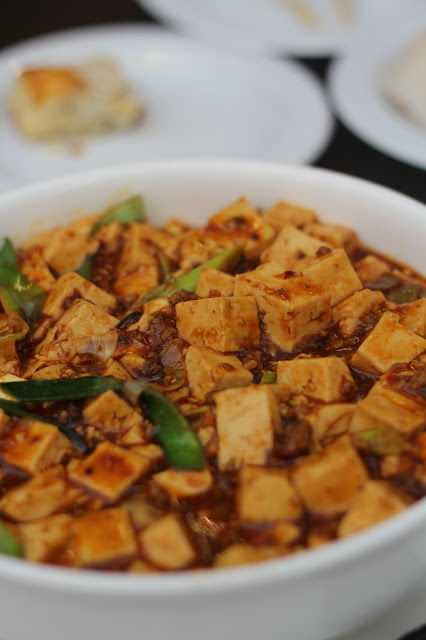 Mapo tofu - ah, another dish that I could have easily polished off myself but decided not too. Was being a cheapskate and did not order any rice to go with it and so, ended up getting a takeaway container for the remaining half of the dish. Felt extremely thirsty after having this, a symptom I get when I have too much salt or MSG.

Overall, an option to consider in Chadstone shopping mall if you are feeling peckish and do not want to send your wallet into a state of coma. Post workout meal - checked

Posted by Michelle at 1:28 AM No comments:

Very rarely do I crave for roasted/ barbequed meat and whenever I do get cravings for it, a quick visit to any decent eatery would suffice. Went here for dinner at around 6pm and sadly, was informed that every single piece of roast/ barbequed meat had been completely sold out.

At this stage, I got a bit fidgety and took an extra few minutes to finalize my thoughts before settling with a plate of barbequed pork omelette on rice. 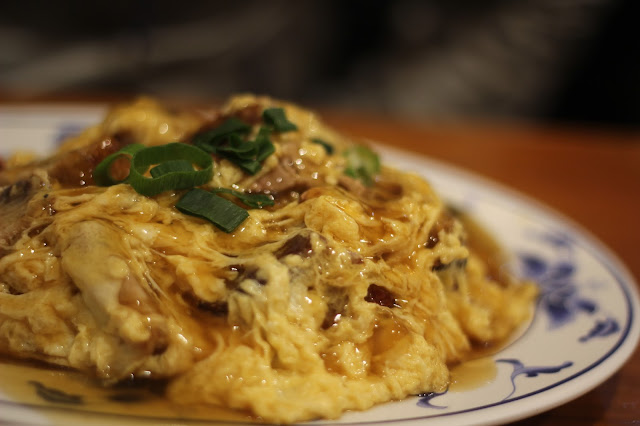 I was surprised when this dish got served as I was informed by the waitress that there were no more barbequed pork meat left for the day. Found this to be filling but rather bland tasting.

Note to self: Always check out the rotisserie before walking into any restaurant.

Posted by Michelle at 1:52 AM No comments:

Contrary to popular beliefs of exuberantly priced meals in Japan, just like any other city, it’s all about knowing where to eat amidst the labyrinth. After all, not everybody can afford higher end meals (unless if you’re born with a silver spoon in your mouth). Sigh, the number of times I caught myself squandering around the clearance food section in supermarkets prior to pay day.

These cheap eateries have meals starting from ¥500 to about ¥800 and again, vending machines are utilized for ordering and cash transactions. After a tiring excursion, the sister and I ducked into this unknown eatery located along the busy streets of Shinjuku. A bowl of oyakodon topped with shredded seaweed and a plate of tonkatsu with curry and rice fed us well that night. 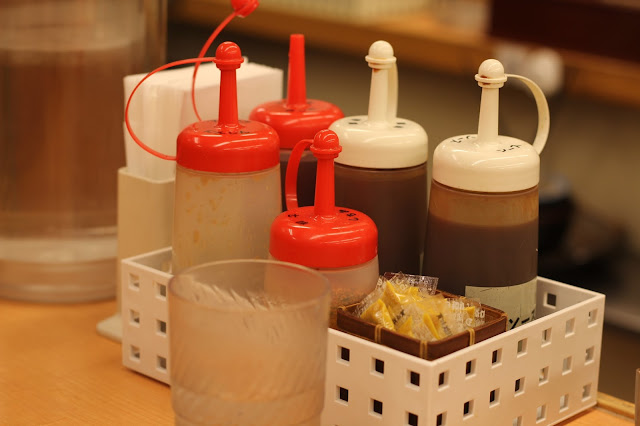 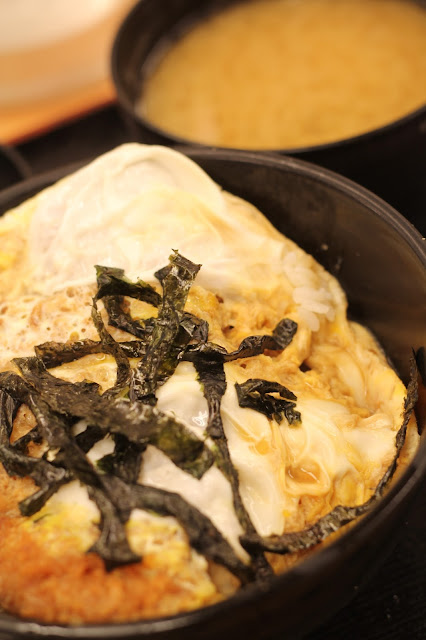 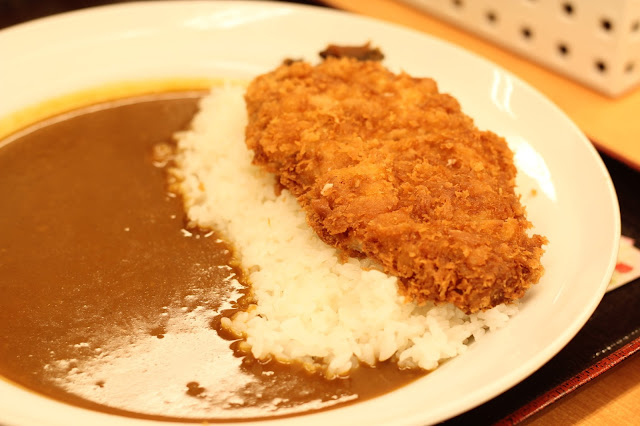 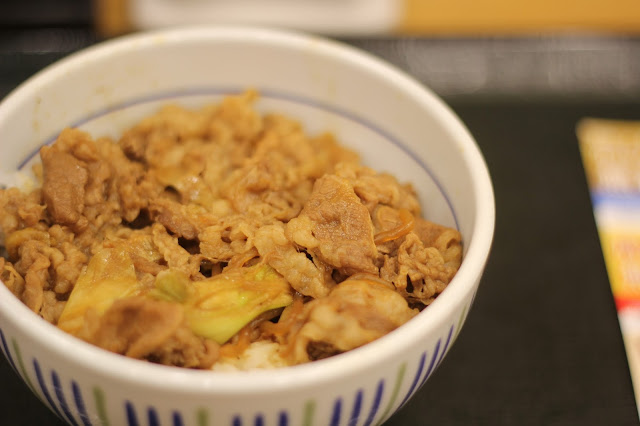 Another one of these cheap eateries located near our hotel in Kyoto made its way into our food diary as we headed here, once again, after a weary day out. Propped on a stool near the kitchen, we slurped up a bowl of kitsune udon, munched into a few pieces of golden chicken karaage and spooned out beef don with slivers of scallion scattered in it atop a bed of vinegar-ed rice. 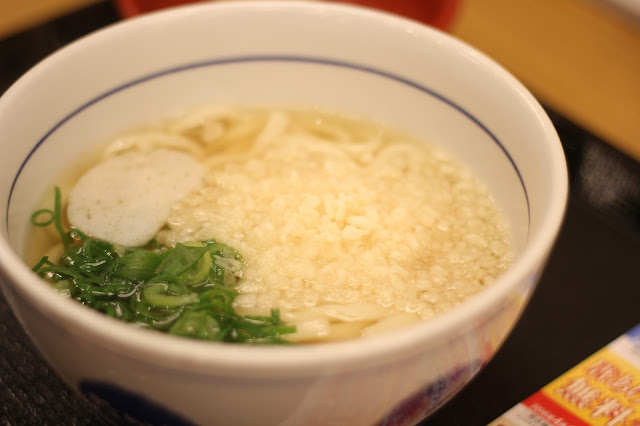 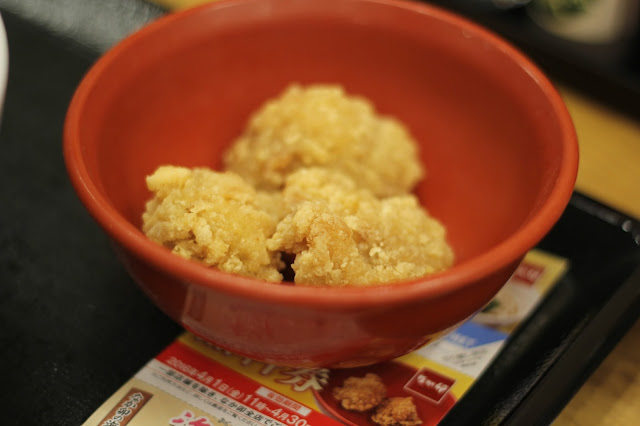 While these were the only two cheap and fast paced eateries that we have been to, others such as Coco curry house and Yoshinoya are vastly available in most cities, also offering the same affordable and quick food concept.
Posted by Michelle at 2:56 AM No comments:

The closes shopping mall to my place would be the Plaza Damas mall which may not have as stores operating in it as compared to a bigger mall. Housing necessary outlets such as a supermarket, pharmacies, optometrists and bakeries, there are also a few quaint cafes offering room for catch ups or leisurely reads.

Food in most malls can be financially taxing and so, sometimes it is wiser to venture out to the many eateries located just outside the mall for meals. According to the father, this eatery is popular among officer workers and students alike. Comfortable and spacious seating area, friendly staff and quick service sums up my first impression here.

There is no shortage of food choices as the menu comprises of a balanced mix of Chinese and Malay cuisines, all priced from RM10 to RM18. Ordered a plate of cucur udang (prawn fritters) and a vegetarian version, both served with sweet chilli dipping sauce. Fritters were chopped to pieces, enabling sharing across the table. Slightly oily but delicious nonetheless. 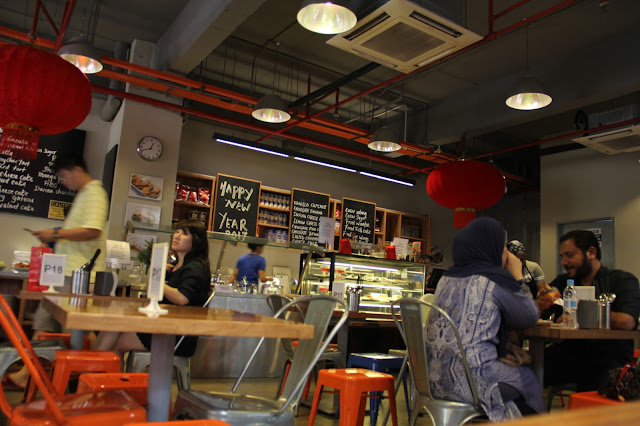 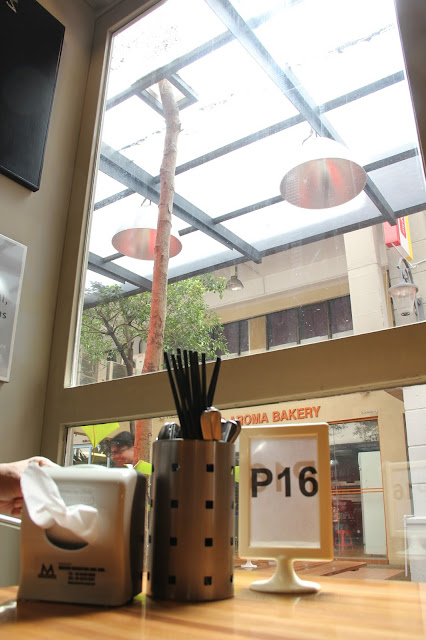 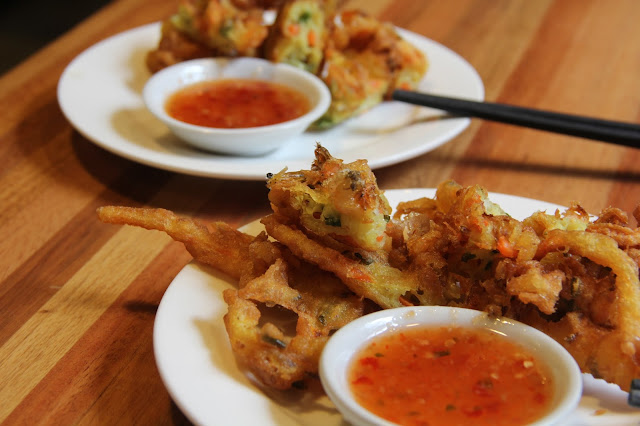 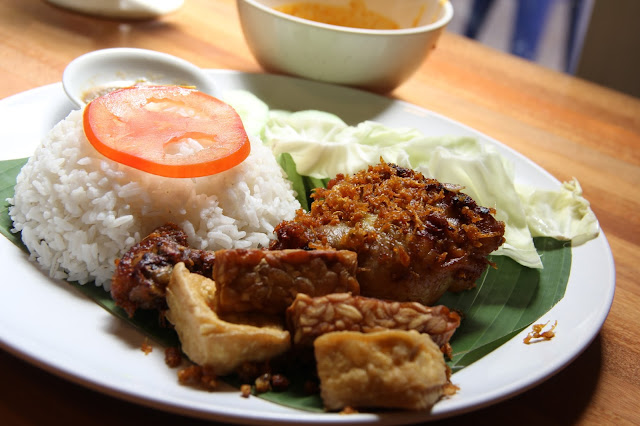 Ayam penyet – the sister, unfamiliar with what she may be ordering but still game enough to take a gamble, ordered this dish. Chicken was crispy and comes topped by a layer of crunchy bits. 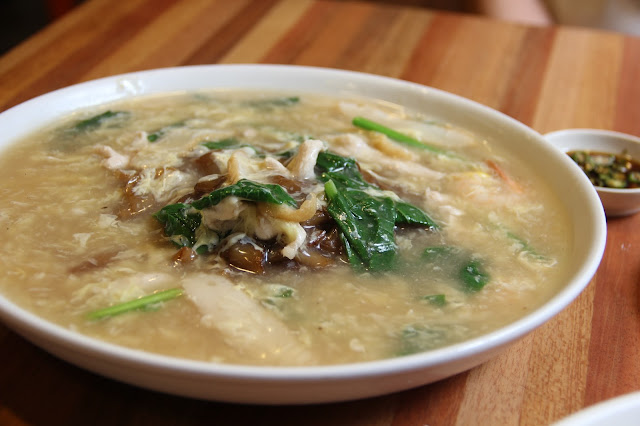 Wat tan hor with fried noodles – portion size is just right for myself and comes with a generous serve of soup thickened with egg.  Alternatively, this dish also comes with a hor fun version. Both go down well with a drop of soy sauce infused by chilli padi aka a tiny, vibrant red chilli known to quite spicy.
Posted by Michelle at 2:51 AM No comments:

Shortage of time is a major issue among the Japanese considering that commuting for work and prolonged working hours take up at least 10 hours in a day, making it easy to dismiss the thought of running to a shop for a gift or to have a decent meal. From my two weeks of holiday in Japan, this was evident to me.

Ranging from sleep deprived to diligent spectacled, newspaper reading employees to the occasional flamboyantly dressed character out of a manga comic, of which, nobody seems to bat an eye at – everyone squeezes into the train in an attempt at avoiding having to wait for subsequent ones. Once we arrive at the Tokyo station, our eyes lit with excitement.

Crowded, yes but just like the other main stations that houses a JR line, it is well equipped with a delicious array of restaurants and specialty shops bearing gifts and souvenirs. I can see how the Japanese save time in a train station. Ah, how excited we were at the prospect of fuelling our exhausted souls.

Noting a line up outside this restaurant, we immediately jumped into the queue out of curiousity. And like any other main train station, free wifi is available, much to the delight of the researcher in me. Turned out this restaurant is renowned for their tsukemen (ramen consumed after dipping in a separate bowl of soup). 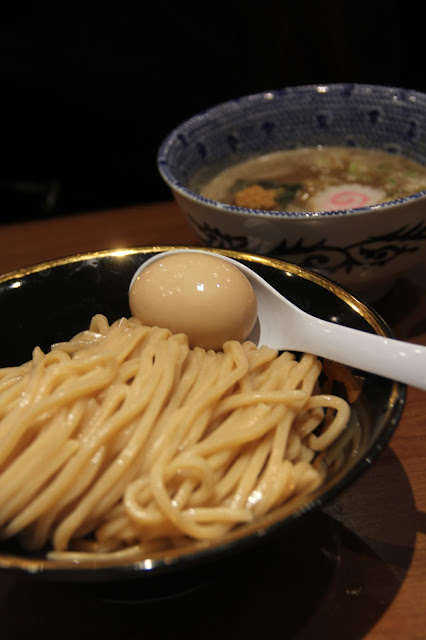 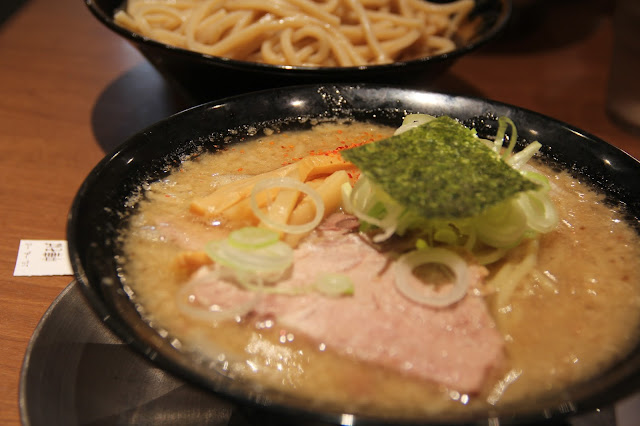 Flavour soft boiled egg dip noodles – bundled up neatly, the noodles were prepared al dente. Dipping it into the accompanying broth softened up its texture slightly, making it much easier for slurping.

For variety sake, we ordered a bowl of ramen in broth that comes served with pickled bamboo shoots pork meat, generously topped with fine slices of spring onions. Again, delicious and pork broth had a delectable flavour depth to it.

At $10 for a good portion of noodles and a thick slab of protein, I can see why the Japanese would brave the meal time crowd and queue up for a spot here.
Posted by Michelle at 10:56 PM No comments:

Winner of an acclaimed international paella cooking competition held in Spain, Simply Spanish won the crowd over with their version. Heavily publicized soon after, the restaurant's business boomed tremendously and the already busy paella cook servicing customers outside the restaurant became even more overwhelmed by a new crowd wanting to sample their paella. 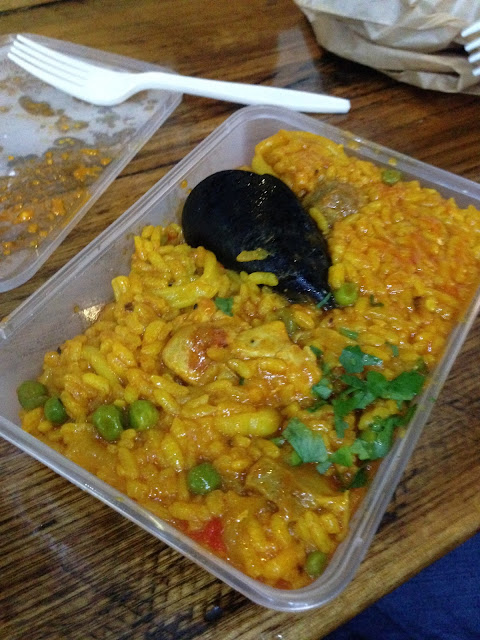 Seafood paella - I have had my fair share of paellas whilst in Spain and am happy to admit that this is worth the wait. Traditional paella ingredients are rabbit meat/ bones, a little bit of chicken, all engulfed by the aromatic saffron, contrary to what we may find in many Spanish restaurants. Whilst what I had may not be an original reiteration, it was still extremely flavourful. Each grain of rice had been slightly softened by a rich stock, accompanied by a generous amount of seafood pieces.

Ah, another excellent reason to wake up early on a Sunday morning.

Posted by Michelle at 8:26 PM No comments: